The 2015 main residency match was an adventure. At my school at least, it was different from previous years. It was more competitive. People were matching farther down their rank lists, and a frightening number didn’t match at all. Why is this? I think it all comes down to numbers, and the “residency crunch” that my class has been hearing about for years. What is this residency crunch?

This year, the NRMP (National Residency Matching Program) has released some preliminary statistics. What we know so far is that there were 651 more US seniors in the Match than in 2014, but only 541 more positions. That means that we were “short” 110 positions compared to last year! In 2015, 6.1% of US Allopathic seniors went unmatched for even a PGY-1 year, compared to 5.6% in 2014.

The numbers were even worse for other applicant groups. The percentage of unmatched previous graduates of US allopathic schools increased from 52.0% to 56.4%. Surprisingly, the percentage of foreign medical graduates who went unmatched was almost identical.

Here are some other key differences in my field, OB/GYN: 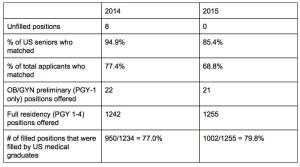 You can see a couple of important things here.

A lot of applicants have been complaining about having “dropped down their rank list,” that is, matched to a program that was lower on their rank list than they expected. Here are the numbers for all US MD seniors: 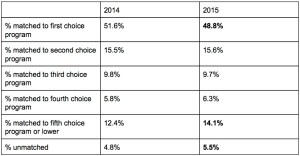 These preliminary data, which represent all graduating seniors from US MD programs, already show us that this year was a very tough year for the match – fewer students matched, and those who did match tended to match lower on their rank lists than last year. For example, last year 76.9% of graduating seniors matched to one of their top 3 programs. This year, that number dropped to 74.1%! The specialty-specific results aren’t out yet, but my anecdotal evidence suggests that several specialties were even worse than these data suggest.

So, what’s the bottom line? The bottom line is that matching to residency is getting harder across the board. Medical schools have increased enrollment faster than new residency positions have been funded, leading to the “residency crunch.” Next year’s graduating classes are even bigger, and it is likely that the growth in the number of graduating seniors will once again outpace the growth in residency positions. To make it even worse, students in the class of 2015 who matched to a PGY-1 only program this year will be reapplying next year, adding to the number of applicants fighting for the same spots. It’s a jungle out there, and you had better be ready to be competitive!

If you are a graduating senior, how did you fare in this year’s match? What advice do you have for younger students?

If you are applying for the 2016 match, how does this change your plans?