If you have no interest in breastfeeding, stop reading here.

I pumped at work for my daughter for a year, while I was a medical student. Frankly, pumping is a pain the rear. It takes a lot of time, and for most people requires a power outlet. I was extremely lucky while I was breastfeeding that my pump was highly efficient, reliable, easy to clean, and battery-powered. The lithium-ion batteries saved my butt more times than I can count. I was really hesitant before I bought it, though, because there were really no reviews out there about it on the web. So I decided to go ahead and write a review. (No, the company doesn’t know about this and isn’t compensating me for it in any way.)

Note: My pump is currently packed away in storage, as I’m not breastfeeding anymore. The pictures used in this review are taken from the Lucina website (lucinacare.com) and are of their current model, the Melodi One. I used the original Melodi, which no longer appears on their site.

Let’s be real – pumping as a medical student or resident isn’t like pumping when you work a 9-to-5 office job. There’s no “pumping during your coffee breaks” and no setting up a “cozy pumping nook” in the corner of your office. Pumping as a student or a resident places some extra demands on your equipment. This review is written with that in mind.

My favorite thing about this pump, by far, was the battery power. The pump runs on lithium-ion batteries. Fully charged, the batteries lasted me 8-10 hours of use, or almost a week of regular pumping at work. Charging the batteries takes about 2 hours, and the pump can also run on outlet power. It was a huge help that I didn’t have to try to find an outlet in whatever odd little broom closet I found myself needing to pump in. It also meant that I could pump in my car without running down my car’s battery. I didn’t have to find an outlet, move a chair next to the outlet, etc., every time I needed to pump. That saved me 5-10 minutes per pumping session. When you’re trying to squeeze in your pumping sessions on the floor, those minutes matter.

The pump unit is about 4″ x 4″ x 6″ and weighs about half a pound (guesstimates only). The pump unit itself was designed as a hospital-grade pump, so the tubing is completely isolated, and the milk doesn’t touch any pump parts.

My insurance paid to get me the pump. Without insurance, it would have cost me $50/month to rent. There were some paperwork issues initially (they kept trying to bill me), but it worked out and it never cost me a dime. Thank you, Affordable Care Act!

Note: The Affordable Care Act requires non-Grandfathered plans to pay for for breastfeeding supplies, including breast pumps, with no co-pay. That means that, unless your plan has been “grandfathered” under the law, your breast pump should be covered in full by your insurance!

Probably the worst thing about this pump, honestly, was the customer support. It’s nearly impossible to reach a human being at the company, let alone someone who speaks English as a first language. You can’t reach anyone on the phone, only by email, so it takes days to get an answer to anything. I tried to order a duplicate set of parts in case something broke, but I couldn’t find a way to do so on their website (hopefully they have since fixed this). 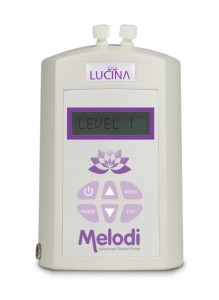 On the flip side, I used this pump daily for over a year, and it never broke. NEVER. No tubing torn, no broken seals, no bent connectors. I had to fiddle with things every once in a while, but after heavy use (sometimes pumping every 2-3 hours all day) for all that time, I think it’s really impressive that nothing ever broke. This thing took a serious beating and it kept working.

This pump is HIGHLY effective. I don’t mean for this to be serious TMI, but I pumped with a Medela Symphony pump before I go the Lucina Melodi. There was also a Symphony at work, which I used every once in a while. I found the Symphony took longer to stimulate letdown, took longer to empty the breasts, and didn’t empty the breasts as completely as the Melodi. The Symphony was just more uncomfortable to use. Using the Melodi felt like nursing. I can’t put my finger on why, or how, but something about how they programmed it was just more effective. Even though there was a Symphony available to me at the hospital on some rotations, I hauled my Melodi to work anyway. I sat in the chair next to the Symphony and used my Melodi instead. The Melodi was faster and more comfortable than the Symphony, even after taking portability and battery power out of the equation.

If I had another baby tomorrow, I would absolutely choose this pump again. I recommend it to anyone who asks. Seriously.

Have you used a different brand of pump? What worked? What didn’t? Would you use it again?