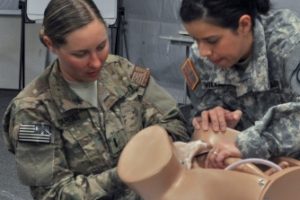 I’m going to assume that you don’t know a whole lot about the military match and explain it from square one, so please forgive me if I’m saying a lot of stuff that you already know. I figured better to explain too much than too little! I am coming from an Air Force background, so I know more of the details of the Air Force system than the Army or Navy. If something is specific to the Air Force, I will indicate that.

Let’s assume that, in a given year,  there are 9 military training slots and 3 civilian deferrals in your specialty of interest. So that makes 12 total people who will train in that specialty. The board, which is made up of all of the military program directors in that specialty, sits down at a big table and looks at all of the candidates. First, they decide which 12 are going to train in that specialty. Then they look at who wants to go where. Who gets what they want depends on whether your top choice program wants you, and whether you have extenuating circumstances such as a spouse in residency in a certain area, family in a certain area, etc.

So how do you get the spot that you want, whether that is in a military program or a civilian deferral? There are two basic things that you need to do. The first is that you need to be selected to train in your specialty of choice, period. To do this, you need to pass Step 1 and Step 2, obviously, but what really matters to the board is whether they want to work with you. They don’t really care about your actual Step 1 or Step 2 CK scores, or your grades. To prove that they want to work with you, you have to do military away rotations and perform well. You are required to do one military away rotation as a condition of your scholarship, but it’s a good idea to “save” your active duty tour from your third year so you can do two military away rotations (if your specialty of choice has at least two military programs in your branch of service). Interview at some of the others in person if you can. In a specialty like OB/GYN where there are only a few programs, it is a good idea to at least telephone interview everywhere. If your specialty of choice has 15 programs, you may not need to interview everywhere 🙂 Either way, you want as many people at that table rooting for you as possible.

Then it comes down to two things: whether the program that you want, wants you, and whether you have a convincing reason why you need a particular location, or a deferral. When you submit your military rank list, if you rank civilian deferral first, you have to give an explanation for why (family, etc) as part of your personal statement. If you rank it second or lower, you don’t have to explain your choice, but if you have a good reason for it, it would be wise to explain that to the military program directors during your interviews.

It is important to be aware of another idiosyncrasy of the military match. The Army and the Air Force match people to a full residency, PGY-1 (intern) through graduation. The Navy initially matches everyone to a PGY-1 (intern) year only, and you must re-apply to continue in training. The majority of interns are, instead, sent out to the fleet to serve as general medical officers (GMOs) (primary care doctors) for a few years between their intern year and their PGY-2 year. I will talk about this in more detail in another post.